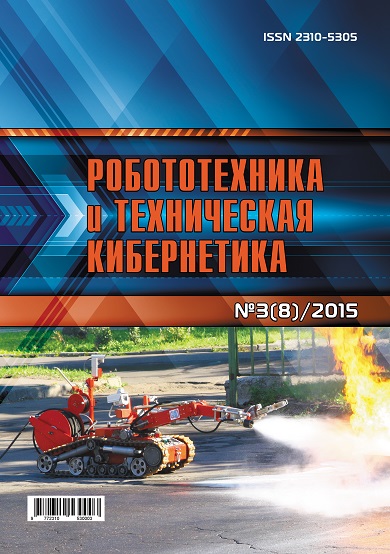 Abstract
Algorithms for interconnection forecasting and determination of possible actions for connectivity support in wireless network of multiagent robotic system are offered.
Developers of multiagent robotic systems face one of overarching challenges, which is intelligent agents' integration through wireless communications.
Solving of this problem is a very significant step when developing multiagent robotic systems (MARS) and has a direct impact on execution speed, performance, and also successful completion of task given to the MARS, since incorrect decision may cause withdrawal of certain robots from the group.
Solving the connectivity recovery problem requires creating of certain algorithms for task distribution compensation and for forecasting of connectivity presence in whole system as the result of this compensation, as a consequence it is considered to be important to facilitate at most the execution of this task by introduction of additional connectivity-control algorithms.
This paper is devoted to the specified problems' feasible solutions, based on the theory of graphs. Based on reachability matrixes of graph, which is relevant to the multiagent system network structure, ways of checking of connectivity between agents and ways of connection of unbound intelligent group agents to each other by the most useful technique are suggested.
Connectivity support in the system rests upon forecasting of upcoming environment in the MARS's work space and subsequent determination of multiagen system possible actions. Analysis of the MARS potential applications shows possible occurrence of exeptional conditions. Such exeptional conditions include:
1. «Opening» – condition when there is a connection between two robots, but robots move in the opposite directions.
2. «Meeting» – condition when there is no connection between two robots, but robots move from the opposite directions.
3. «Overload» – condition when large number of messages, passing through node, cause time lags.
4. «Idle» - condition when no message passes through node, only messages of the node itself.
It is obvious that conditions 1 and 3 require use of additional (free of tasks) agents, conditions 2 and 4 allow to free agents from task conduction. In the present paper ways of such conditions identification, based on connectivity matrixes, use of which is conditioned by the previous works' results, and data on planed actions of each agent, are suggested. Offered method consists of three stages: analysis of obtained matrixes and data; check of detected exeptional conditions; decision making on resequencing of sub-tasks accomplishment.
On the basis of obtained algorithms, software, enabling the simulation of specified problems solving, is devel-oped. Resuts of the research can be used for development of algorithms for task distribution planning in MARS and for related tasks solving, for example, such as assessment problem for effective quantity of multiagent group.